Sheena’s pamphlet Painting My Japan is an exploration in poetry of the people, culture, history and sights of Japan and was published by Impspired.

‘a series of powerful and richly lyrical poems’ (Anna Saunders)

“A Buckner poem moves, and moves unexpectedly. He does this not be pyrotechnic, or modish, but because his subject is mankind…” (U.A. Fanthorpe)

“At the heart of Adrian Buckner’s meditative accuracy is a profound, sometimes wistfully comic, sometimes quietly passionate, questioning of what it means to live in the face of time, love and loss” (Wayne Price)

Becky has a poetry chapbook, un(in)formed ‘the latest collection of poems from Becky Deans, steeped in both the landscape and characters of the Derbyshire surroundings she precisely observed. Tackling a range of subjects without fear nor with any concessions made, Becky’s words leap from the page with confrontational immediacy.’ This can be bought via Bearded Badger Publishing. Becky also published a novella in 1998, exposé, which was a development of her first degree dissertation and the third text in the UEA series.

Poems from Prison & Life (2021) 74pp by Marcos Ana, bilingual edition, translated from Spanish by David Duncombe £7.50 inc. post’  “A remarkably moving collection by a man wrongly imprisoned for over 20 years during the Franco regime”.

Cathy has many books to her name. These are: Something the Heart Can’t Hold published by Poetry Nottingham Publications; Fighting Talk published by Headland; Still Breathing published by Five Leaves, Laureate Lines published by Derbyshire County Council; and The Sky, Head On pub Shoestring Press. Cathy’s new collection, Surrender, is forthcoming in March 2022.

Occasional collections of poetry are published by Poetry Nottingham Publications and have included the work of Peter Cash, Peter Sansom, Huw Watkins, Joan Downar, Cathy Grindrod, Adrian Buckner among others. 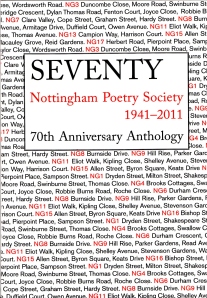 An Anthology of poetry by current members of Nottingham Poetry Society published to celebrate the Societies 60th Anniversary in October 2001.
Launched on 3rd October 2001 at the NPS 60th Birthday Party as part of a week-long ‘Poetry in the City’ event organised by Nottingham City Council, this anthology contains poems selected by Amanda Dalton, Education Director of the Royal Exchange, Manchester, and Poet-in-Residence at Southwell Minster during 2000.